Ducted Air Conditioning VS Split System | Which Is Best?

But before we jump into the comparison, let’s provide a quick definition of each system.

What is a ducted air conditioner? 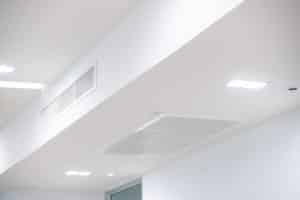 Vents for a ducted air conditioner

A ducted air conditioner is a system that uses ducts and vents to deliver cool or warm air throughout a property. It has a single inside unit called an evaporator, which is usually installed in the ceiling cavity (or underneath the flooring if there’s no space in the ceiling), and an outdoor unit called a compressor. They are suitable when you want to cool multiple areas or rooms.

What is a split system air conditioner? 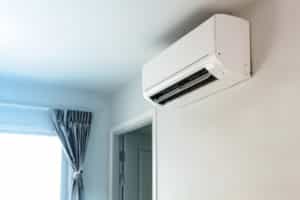 A split system air conditioner is a wall-mounted unit that delivers cool or warm air directly to the room. It’s connected to an outdoor unit called a compressor. They are suitable when you want to cool just one or two rooms in your home.

When you have multiple wall-mounted units connected to a single outdoor unit, this is called a multi-head split system.

Here’s a full breakdown of ducted air conditioning vs split systems, with every major consideration included.

Number of areas to cool

When it comes to ducted air conditioning vs split systems, the defining factor is usually how many areas/rooms you want to cool in your home. If you have a house and want to cool three or more rooms, a ducted air conditioner will be capable of doing so with just a single main unit installed in the ceiling (or under your floor), and a unit that sits outside. Cool air is delivered via ducting that runs throughout the house, and pumped through subtle air vents in each room.

If you have a small apartment or a house where you only want to cool one area, a split system is a better option because it’s just a single wall-mounted unit, and a unit that sits outside. The split system will be suitably sized for the property, and will consume much less power than a ducted air conditioner, which have much higher energy capacities. If you want to cool multiple two rooms/areas, you can have individual wall-mounted units in each room.

The next big consideration for people is installation cost. A ducted air conditioner is a bigger, more expensive unit that requires ducting to be installed, so you can expect to pay upwards of $12k for a good quality system. Split systems are cheaper, starting at around $3k from a quality manufacturer, but will quickly add up if you add extra units to other rooms. It generally becomes more cost effective to install a ducted system when you want to cool three or more areas.

On the topic of cost, energy usage is another important consideration. Ducted systems are much more expensive than split systems to run—about double the price. But this can be brought down considerably if the system is zoned, which means being able to activate cooling for specific zones throughout the house, like turning it on in the living room, but off in the bedrooms. This is a common installation these days.

The main unit of a ducted air conditioner is in the ceiling or underneath the flooring, so tends to be much quieter than split systems. With a wall-mounted split system, the unit is usually either above your head or on a wall nearby, and you’ll almost certainly be able to hear it, especially when you sleep. But in saying that, high quality manufacturers like Panasonic, Daikin, and Mitsubishi all produce excellent split systems that are relatively quiet.

Evenness of cooling and heating

If you want a good night’s sleep in summer, air conditioning is usually a necessity. But because split systems blast air directly from the wall-mounted unit, they can be a bit too chilly, even with the fan set to rotate. Ducted systems distribute cool air through vents that are usually placed high up on the ceiling, and they create a much more even distribution of air as a result.

With a ducted air conditioner, all you can see are the vents through which the air is distributed, and the outdoor unit (although this is sometimes tucked away out of sight). That makes these systems much more aesthetically pleasing, because there’s no bulky wall-mounted units in each room.

Smart capabilities let you control your AC system from wherever you like, even when you’re not at home. This means that on a particularly hot day, you can activate your AC while you’re driving home and walk into a chilled nirvana.

Fortunately, both ducted and split systems can be installed with smart device capabilities that provide these features. You can also install separate systems like MyAir or Que Touch, which may offer even more benefits.

Both ducted air conditioners and split systems need to be maintained roughly once a year, but because ducted systems are more complex, they are more expensive to do so.

In the battle of ducted vs split systems, you’ll need to consider the size of your home, your budget, aesthetics, and features that may be important to you like controlling the system from your smartphone. Usually, the number of areas you want to cool will be the defining factor.

What Is A Power Surge? How…

A power surge is a surge of electrical power that is higher than usual. It can affect the performance of your electrical devices, gradually damage them, or even completely destroy them if the surge is big enough.

Should I Keep My Ducted AC…

If you’re lucky enough to have a ducted air conditioner in your home, you’ll be familiar with its excellent benefits. They cool quickly, are super quiet, and tucked away in the ceiling, preserving the beauty of your home.

Daikin is one of the leading air conditioning brands in Australia, providing a range of high-quality ducted and split systems across the country. But as with any complicated piece of equipment, things can go wrong, which can leave you scratching your head for answers.